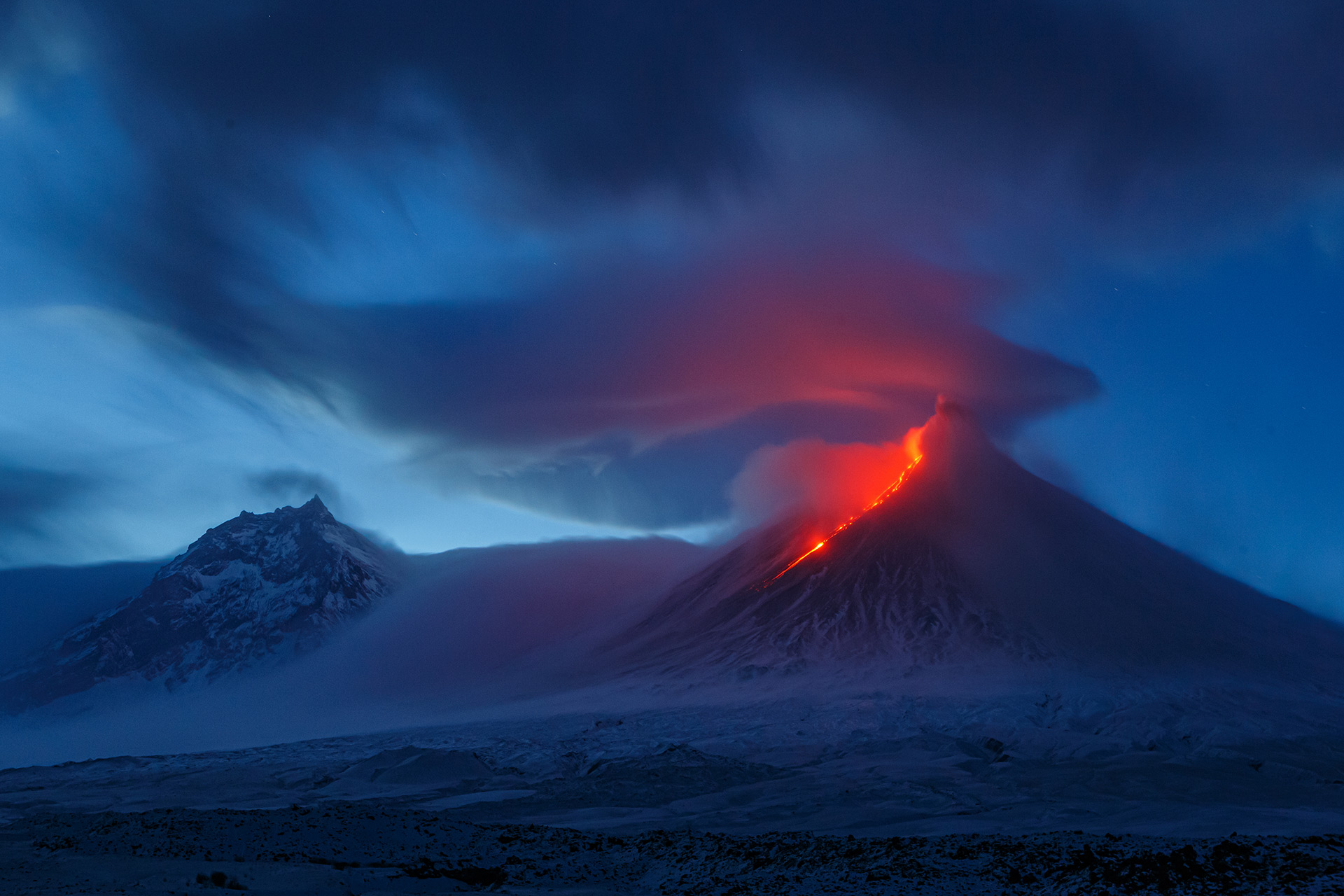 The photo shows the eruption of the highest and most active volcano in the natural park Kamchatka “Klyuchevskoy”. The park is near the seismic station “Apakhonchich”. The lenticular cloud above the top of the volcano, illuminated by hot lava, creates the impression that a fire-breathing dragon is sitting on the top under the clouds.

For 10 years now I have been photographing the eruptions of this volcano and for the first time I have filmed it from this angle. This place is amazing because here you can see 3 volcanoes standing side by side like the great pyramids of Giza. On the right is the highest volcano “Klyuchevskoy” (height 4750 meters). In the middle is the volcano “Kamen” (height 4585 meters) and on the left is the volcano “Bezymyanny” (height 2882 meters). Unfortunately on this day it was covered with clouds.

When we went to the shooting, I already knew exactly which picture I would like to take. I had to catch the right moment in the twilight. When it is too light, the volcano is clearly visible, but the incandescent lava is not visible, and vice versa, when it is too dark, the outlines of the volcano were not visible, but the lava was clearly visible. Therefore, the main task was to capture the moment when the volcano was still visible, and lava was already glowing on its slope. Therefore, I used the continuous shooting of about 100 frames and it turned out to be the very frame that I wanted!!!

I was born and I still live in the most amazing place of my Motherland – in Kamchatka. Since childhood, I love to go hiking. Love for nature and a desire to show all its beauty built up my motivation to study the basics of photography and develop my skills in practice. All my photos are dedicated to the unique nature of Kamchatka. This is an amazing land where you can climb a volcano and feel the breath of the Earth, raft mountain rivers to the Pacific Ocean and be the first in Russia to watch the dawn. See how a brown bear catches salmon that is migrating to the spawning area, and then you and the bear can enjoy eating some juicy berries in one and the same field. Moreover, you have a chance in a 20-degree frost to plunge into the embrace of a hot-water river.