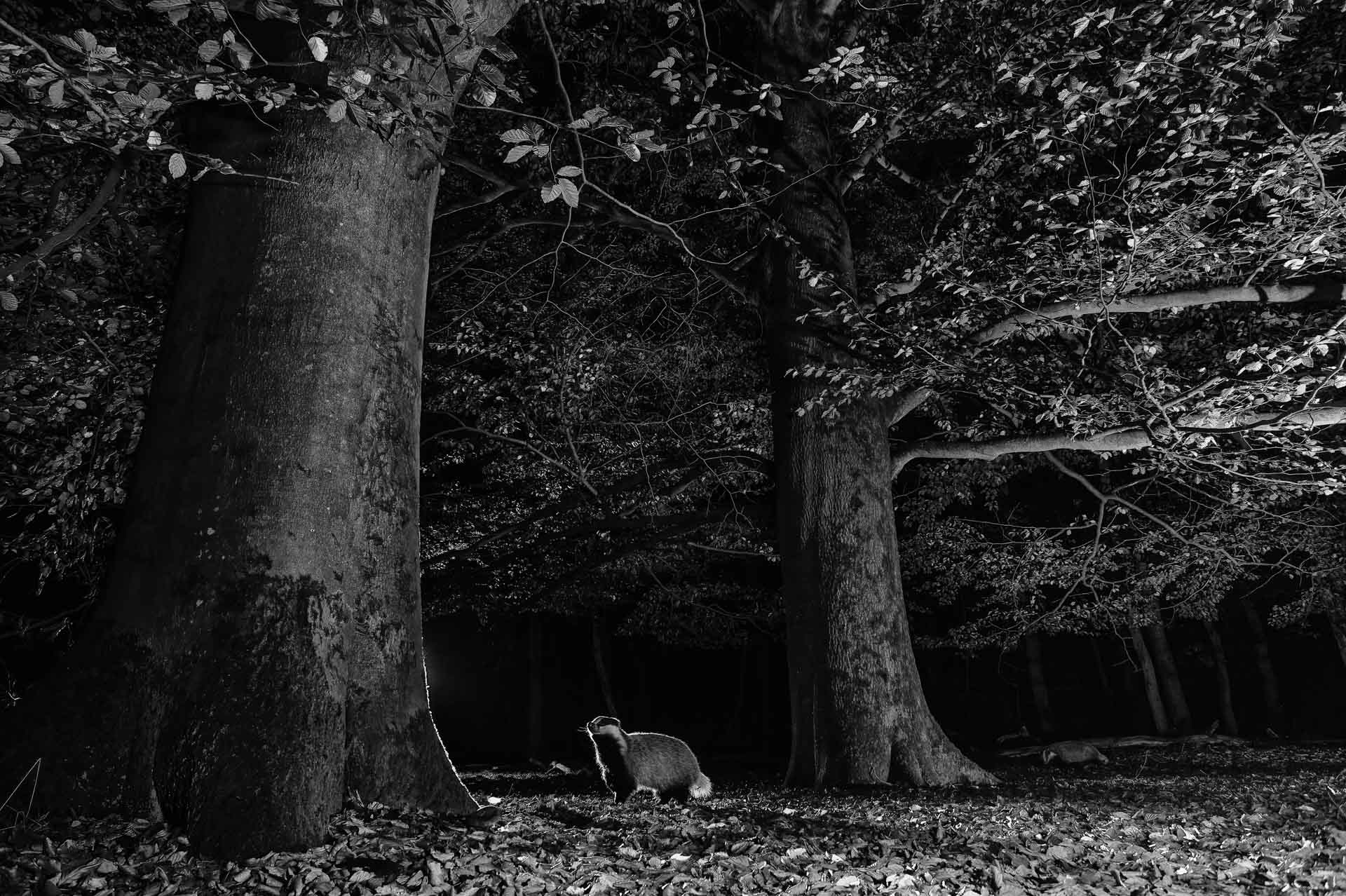 Many hours of preparation preceded this image. In this Soerel forest (nearby Nunspeet), which borders a meadow and a highway, there are two giant beeches. Especially during fall, these trees look fantastic. A little further down this same forest, a badger sett is located. I came up with the idea to take a picture of a badger during its nighttime walk in between the two beeches. I wanted to capture this with a wide-angle lens and used a 17-40 mm zoom lens. Of course, such a lens deforms a bit at 17 mm, but it also results in a great perspective. Later I even used an 11 mm. To give you an idea: the badger is about 1.5 meters away from my camera setup (camera on the ground). The beeches are about 3 meters apart.

Taking photos at night is a challenge. The biggest problem is not seeing your subject in the dark. I used an infrared viewer to keep an eye on all activity. The most important thing is to illuminate everything properly. For this, I used four Speedlite flashes. For every flash, I can regulate the output individually. The main light is the flash that causes the beautiful backlight. This flash is located behind the tree on the left; the distance to the beechers is about 20 meters. This flash is hanging in the tree at about 2 meters from the ground and I put a Better Beamer flash extender on the flash head. This extender generates a narrow beam pointing exactly where the badger is walking. A second flash is placed next to my camera and is equipped with a flash diffuser. This one generates a beautiful soft-fill light. Behind the right beech, a third flash is located; I make this one flash straight up along the trunk of the tree. A fourth flash is on the ground on the right side of the image. These latter two flashes illuminate the foliage. One night I tested and evaluated the entire lighting plan. I wrote down all information about the camera and flashes and got to work the next day. I focused the camera on the spot where the badger paused and subsequently switched off the autofocus. To see the badger in the dark, I used a night viewer. I take the picture from a shelter tent about 25 meters from the subject. 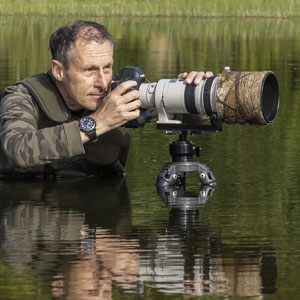 Ernst Dirksen (born in 1959) works as a freelance photographer. In addition to his specialty and passion, wildlife photography, he freelances for several companies and clients. He is also a certified tennis instructor. “I’m a perfectionist and pay attention to detail. With current techniques, it’s possible to take good wildlife photos for many people. Given the popularity of wildlife photography, it’s very difficult to take great pictures these days. To end up with optimal results, a good eye, love for and knowledge of nature, mastery of the techniques and creativity are crucial. When it comes to wildlife photography, I work project-based. I push the boundaries and end up with special images in many cases. The Netherlands, and particularly my home base (Nunspeet, Veluwe), inspires me. I’m specialized in subjects that I come across close to home, but also often cross the border to take photos abroad. In my opinion, you end up with the best results by putting in the time, knowing your subject well, and exploring all the options. I won several national and international awards for my work; among others, National Geographic, Argus photographer of the year, making it to the finals of BBC Wildlife Photographer of the Year and Grasduinen/Roots.” Ernst also offers challenging workshops. And he contributed to WILD, a cinema film about the Veluwe, as a cameraman. “This was a fantastic experience for me. Thankfully, our country still offers some great nature, but a lot of it has also disappeared in recent years. Let’s protect and cherish what remains.”