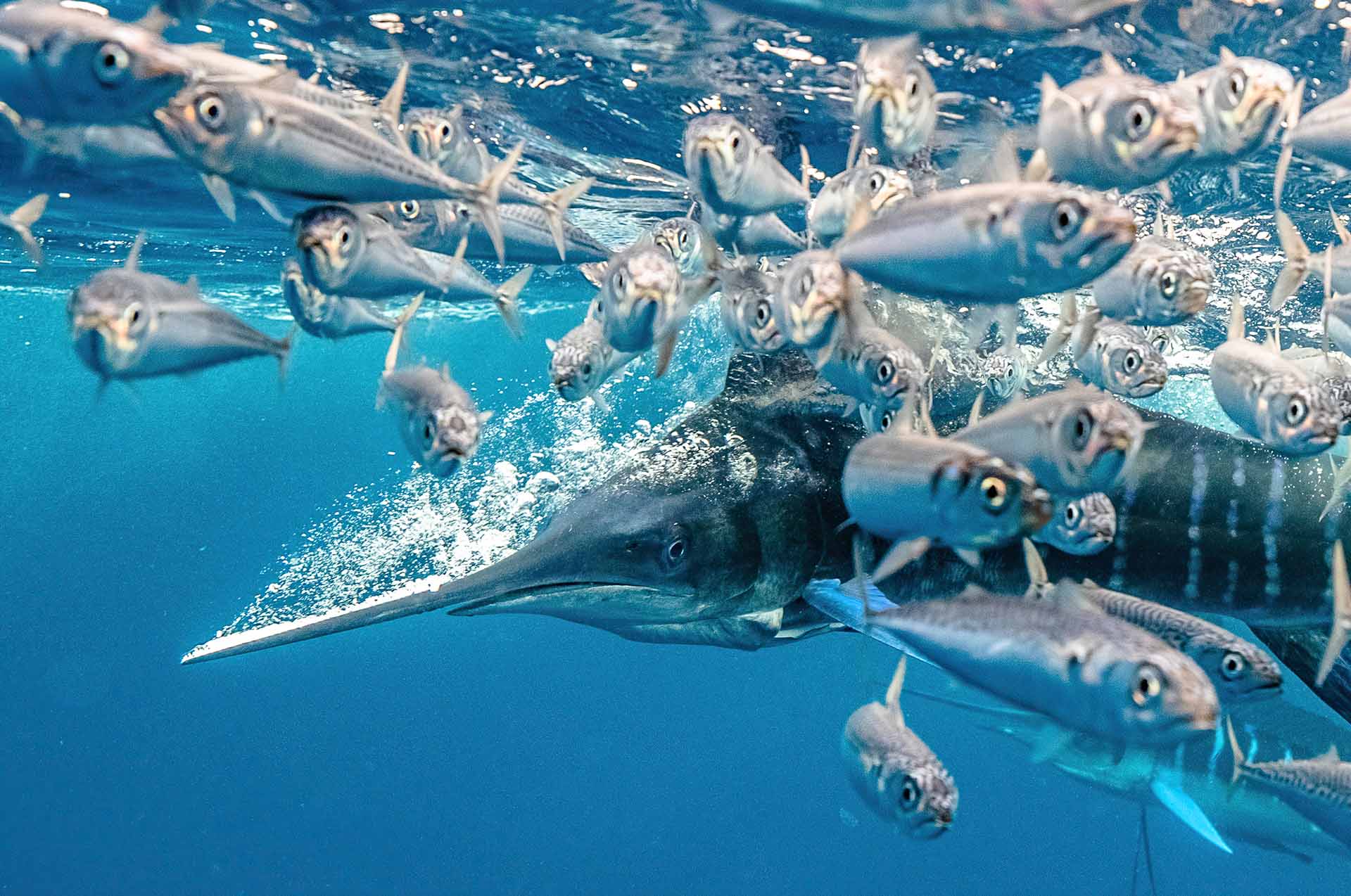 A terrifying scene for the small fish, fleeing for their lives as a striped marlin hunts them. Here, the slightest mistake means life or death as the marlin’s bill slices through the water during a high speed hunt. These fish have very little respite, as birds try to hunt from above and more than a dozen other marlin and sea lions all attacking the same small ball of fish. Marlin are one of the fastest fish in the world, a terrifying predator for a small fish in the great blue desert.

I took this photo in the Pacific Ocean off the coast of Baja, California, Mexico. A friend of mine had told me about the marlin aggregation where Marlin and Sea lions hunt together, bringing small fish up from the depths and corralling them into a ball near the surface. The marlin can turn their stripes on and off, which might be used to communicate when hunting. These bait fish stand very little chance of survival as more marlin and sea lions join the feast picking them off one by one. Watching animals hunt is one of the greatest spectacles in nature, as the line between life and death comes down to millimeters and fractions of seconds.

I spent 3 days to document these hunts and capture the visceral realities of life in the ocean. During my time in the water I watched many little mackerels and sardines being hunted, and even speared by the marlin’s bill. From afar, this struggle can look serene and peaceful as the baitfish move like a river, so I wanted to show the intensity up close, and to try and capture the relationship between the predator and the prey. This meant I had to get a little closer without getting in the way, and be ready if the opportunity came about. When I was close I could really feel the panic of these little fish, desperate to survive. If I got too close for too long, the fish would seek protection from me. To avoid this and not disturb the natural behavior, there were a a couple times that I had to dive down and away from the bait ball. Typically, there was no hope for these little fish, and every last one of them would be hunted. When it was all done, all that would be left were shiny scales as the Marlin and Sea lions disappeared back into the blue.

Karim Iliya is an underwater photographer, drone pilot, and filmmaker, and whale swimming guide based in Maui, Hawaii. He grew up in the Middle East and Asia and developed a curiosity for the natural world which has taken him into the midst of battling whales, exploding volcanoes, ice worlds of the Arctic, and many of the fascinating places that humans and animals make their home. Karim aims to use photography and video to show a unique perspective and uncover new worlds underwater that few have the opportunity to see, and to tell stories about people, places, and animals in order to better our world. He has worked in over 40 countries though his passion is in documenting whales, big cats, and other threatened animals in an effort to protect our delicate ecosystems on Earth. Karim has been published in National Geographic Magazine for his humpback whale photography.