On the coast close to the town of Livingston in Guatemala large numbers of birds are concentrated. These great egrets, which are also being called ‘Egretta alba’, benefit from the remaining fish that fishermen throw into the sea. In the late afternoon, a strong storm formed in the background, providing a great contrast between the white of the herons’ feathers and the darkness of the sky.

This picture was made with a wide angle the 16-35mm. To get the viewpoint at the same level as the water surface, this photo was taken with an underwater housing. 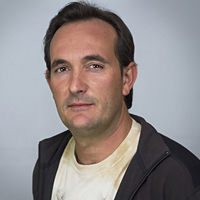 Since I can remember, I have always been astounded about animals and their world. I started photographing them in 2002. After going on safari in Kenya on my honeymoon, I realized I can’t stop photographing animals. On April 2005 I bought my first digital camera, and from that point I started to become very successful in my work. I prefer to photograph birds and mountains and this has become my specialty. I always take advantage of the best moments in nature to capture wildlife and their habitats. The fact that I have never missed an opportunity that Mother Nature gave me has made me an all-round photographer. Nature and the countryside have been my tools to learn about photography. Through the lessons of great photographers who have now become friends and the research into bird behavior (which I have spent most of my time on) I have achieved very satisfying results for myself. Going out and get into a “hide” to observe everything without being seen by the environment around you, is one of those feelings in life that leaves you speechless.