NATURE PHOTOGRAPHER OF THE YEAR 2020

I took this photo in Nakuru National Park, Kenya. To have a better chance of finding good light I went on a deliberately organized safari during the rainy season. Just before sunset my friends and I noticed a group of giraffes passing in front of the forest. With a long lens (600mm) I found a magnificent glimpse into the forest that stroke me a lot. So instead of taking pictures to the giraffes passing by, I kept my post still hoping for a glimpse of the giraffes walking past at that point. The angle was narrow, there was a lot of vegetation in the foreground that could damage the image. So I used an aperture as wide as possible.

In the end, I was rewarded by my stubbornness: the giraffes passed exactly in the right place. The scene reminded me of a Jurassic landscape, with a herbivorous dinosaur in the same position as the giraffe. 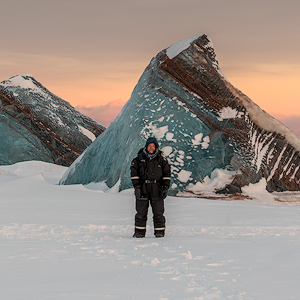 I was born in 1963 in the Marche region in Italy. I never left Italy, I still live in Ancona.

I’ve been taking photo’s since I was 14 years old. I love nature in all its forms and I try to convey that in my photos. Nature’s beauty and the emotions inspire me a lot.

Lately I dedicated myself to nature photography. I mainly photograph landscapes but also take underwater and wildlife photos. I have a more emotional approach to documenting nature, always trying to get the most aesthetic result. My photos have won honors (category winners, runner up and highly commended) in major international competitions. Below a list of won competitions: