I found this white rhino mother and calf resting in the heat of the day and returned to a nearby waterhole just before sunset hoping they might visit to drink. I realized there was the potential to create a dramatic image by shooting into the sun and underexposing to capture the backlit dust that would be kicked up as the rhinos walked past. So, having snatched a couple of shots of them drinking, I repositioned to get a view of the route I expected them to take when they left. With lots of trees in the area, the rhinos would only be in the open for a few seconds and if they left in a different direction, I wouldn’t get a single shot but fortunately, the gamble paid off. Instead of focusing on the negative aspects of rhino poaching, I wanted to create an image that conveyed a sense of hope – a new beginning almost – as if these were the first rhinos being forged in a fire of creation. The effect of the backlit dust, which created a blurred shadow image, added to the ethereal effect. Botswana only started reintroducing rhinos to the wild in earnest in the early 2000s but despite initial success, poaching rates have soared in recent years. The situation was further exacerbated when Covid effectively closed the tourism industry for two years, leaving wildlife areas devoid of the network of watchful safari vehicles which acted as a deterrent to poachers in the past. As a result, Botswana’s rhino numbers have been decimated. Ultimately the only definitive way to stop rhino poaching is to somehow stop the demand for rhino horn. If by portraying the beauty of this unique species, this image stops just one person from buying rhino horn products, then that would be a small start. 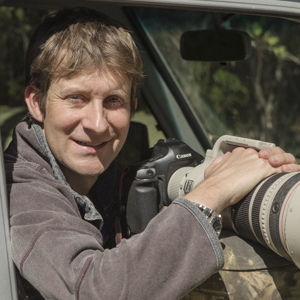 Based in Botswana for the last 17 years, James Gifford is a multiple award-winning photographer, videographer, and writer, with two published books and numerous magazine credits to his name. In between guiding specialist photographic safaris and creating marketing content for safari companies, he takes every opportunity to get into the bush to create images that aim to influence the way we think about the world and conserve the bounty of wildlife that is still left on our planet.