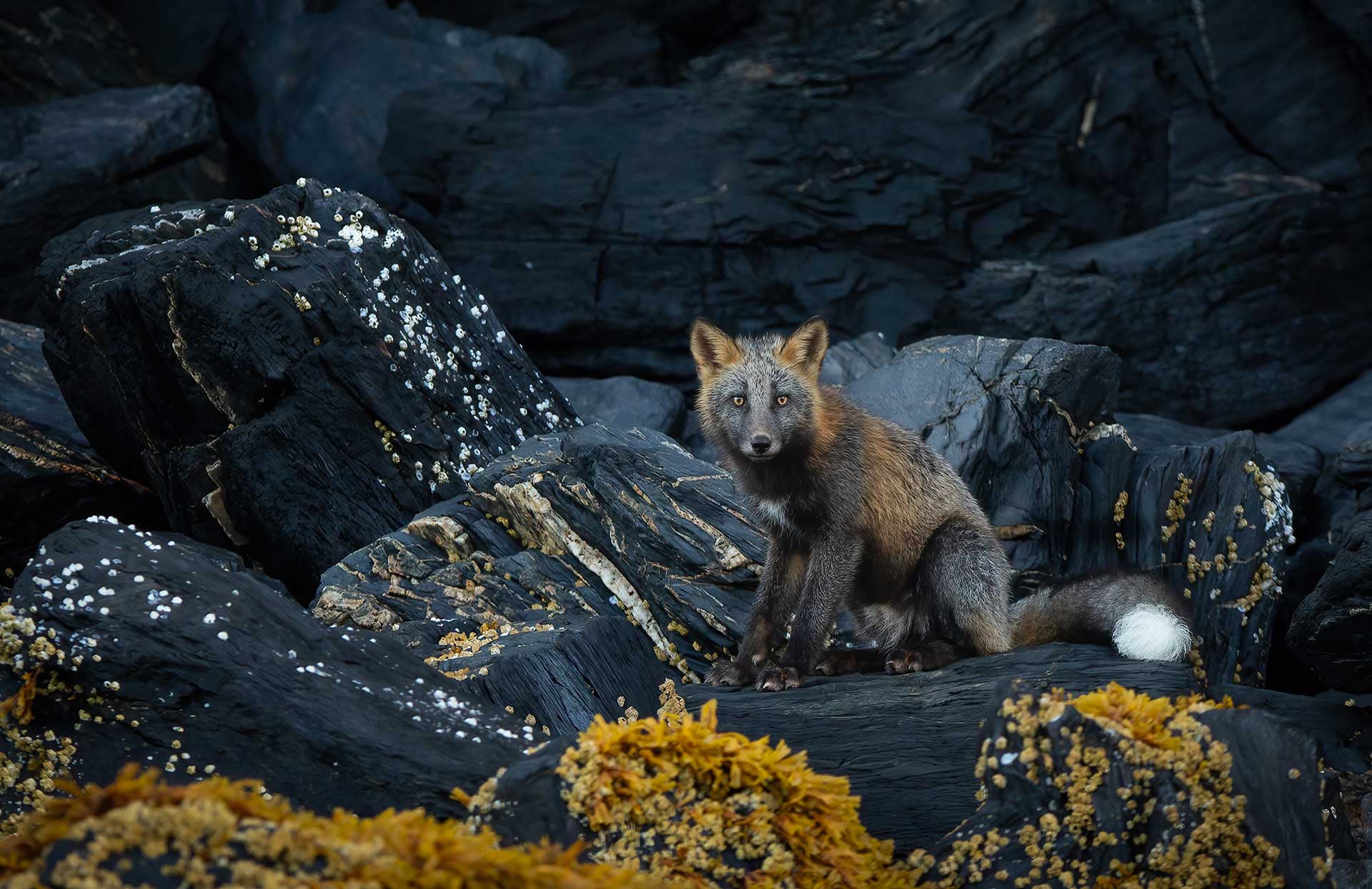 I captured this image of a cross fox handheld from a rocking boat in a remote area on Kodiak Island, Alaska. Red foxes are native to Kodiak Island and the Kodiak red fox belongs to a separate subspecies, Vulpes vulpes harrimani. There are three common color variations of them: red, silver/black, and cross, the latter with a black/brown cross on the back and shoulders. In the mornings, we went out on the boat towards the ocean to look for whales and some animals on the shore. We photographed bald eagles, black-tailed deer, and red foxes along the way. All of a sudden, we spotted a cross fox on some huge, beautiful black rock formations further away from the beach. We approached the fox slowly so that we don’t disturb him or scare him away. Luckily, he stayed on the seaweed covered rocks and I could take some shots while he was sitting in a great spot and he even looked straight into my camera for a brief moment. Looking at the scene with this beautiful cross fox in the perfect landscape made me feel like I was looking at a painting. In Alaska, foxes prefer to eat voles but they also hunt for squirrels, rabbits, or other small mammals. This cross fox was down at the beach digging for worms, fish, or sea urchins during the low tide which is normal behavior for the Kodiak foxes, especially in the morning or evening. 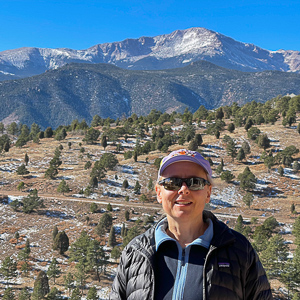 I was born in Hungary and lived there until the early 90s. I was teaching foreign languages before life took me to the USA. Currently, I live in Colorado and I make a living as a financial software consultant. Colorado offers great opportunities to capture beautiful landscapes, plants, and wildlife in our own backyards. I always enjoyed hiking and being out in nature but I started to get seriously into photography about 12 years ago when I bought my first DSLR camera. I realized that my passion is wildlife photography and my favorite subjects are wild cats and bears but also enjoy photographing all kinds of mammals as well as raptors. I have traveled to Africa to capture the big and small cats there and observe the Great Migration. I have been fortunate to photograph the Iberian Lynx in Spain, bobcats in California, Bengal tigers in India, and Pallas’s Cats in Mongolia. I also traveled to see polar bears and brown bears in Alaska and grizzly bears in the Grand Tetons National Park. I would like to continue traveling around the world to capture more amazing wildlife moments in the future – one of my dreams is to be able to capture melanistic leopards and serval cats. I found a deep connection with cheetahs while observing them on safaris. My main goal with photography is to raise awareness about endangered cat species – one of them being the cheetah – and help with conservation efforts. I am hoping to capture the beauty of nature and the memorable moments of the animals that evoke empathy and sympathy in the viewers. The more people feel a connection with wildlife the better chance we have to take care of our planet. Some of my photos have been recognized in competitions by NANPA, Outdoor Photographer Magazine, and The Wild Lens.